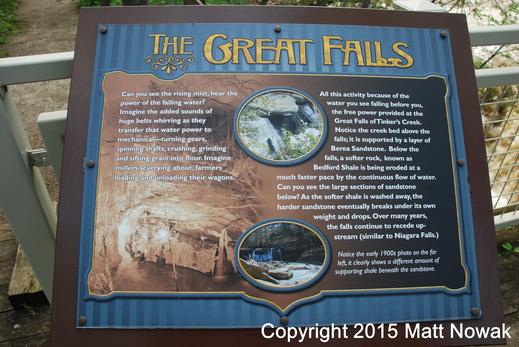 Primary Sources:
- Interpretive Historical Sign:
The Great Falls: Can you see the rising mist, hear the power of the falling water? Imagine the added sounds of huge belts whirring as they transfer that water power to mechanical – gears, spinning shafts, crushing, grinding, and sifting grain into flour. Imagine millers scurrying about, farmers loading and unloading their wagons.

All this activity because of the water you see falling before you, the free power provided at the Great Falls of Tinker’s Creek. Notice the creek bed above the falls; it is supported by a layer of Berea Sandstone. Below the falls, a softer rock known as Bedford Shale is being eroded at a much faster pace by the continuous flow of water. Can you see the large sections of sandstone below? As the softer shale is washed away, the harder sandstone eventually breaks under its own weight and drops. Over many years, the falls continue to recede upstream (similar to Niagara Falls.)

Notice the early 1900s photo on the far left, it clearly shows a different amount of supporting shale beneath the sandstone. 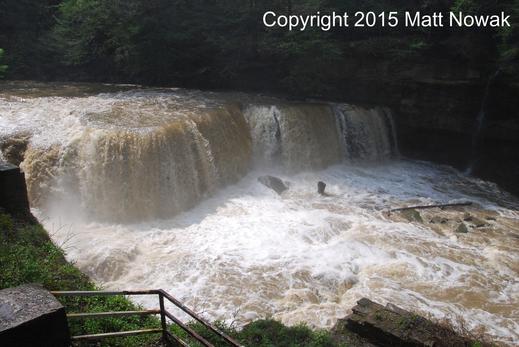 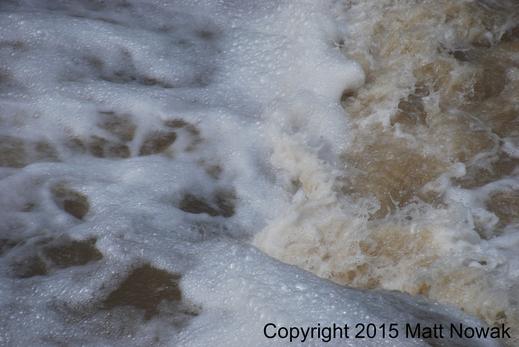 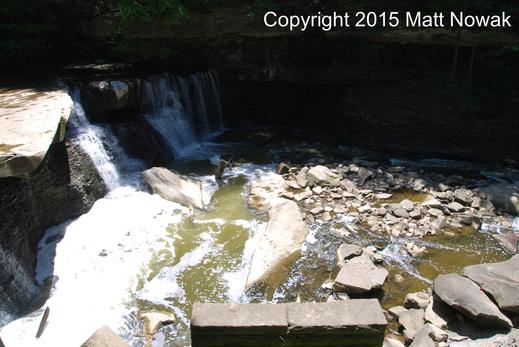 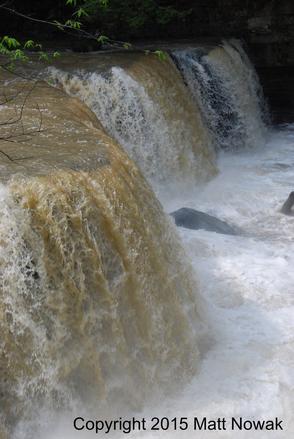 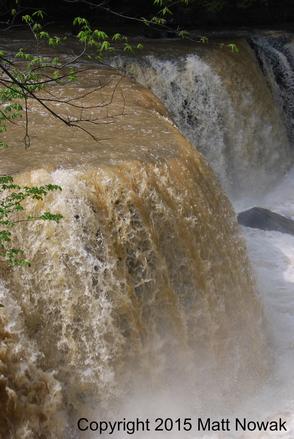 Figure 10 After heavy rains, water flows over every inch of the Falls. Photo taken 5/14/14. 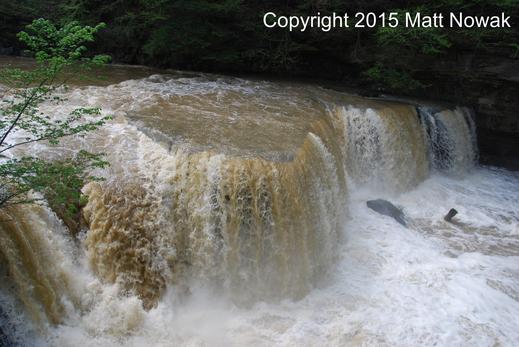 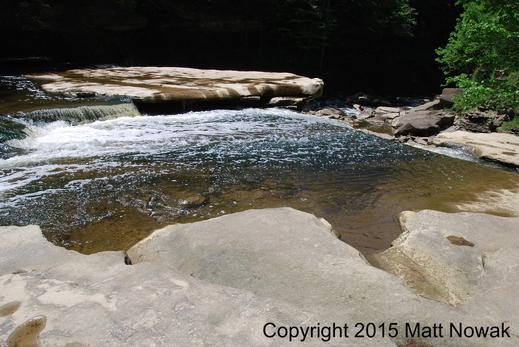 The falls are located in the heart of a relatively new Cleveland Metropark (Viaduct Park). It is a local attraction and one of Cleveland’s only waterfalls. While the Great Falls continues to transform over the long term, its temporary preservation is intact as part of a large and highly successful Metropark system. As more people learn of Viaduct Park and its hidden gems, the more popular the Great Falls of Tinker’s Creek will become, helping to preserve it and its history for generations to come. 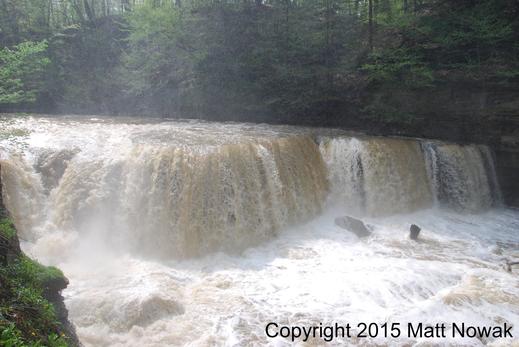 Industrial foundations, like that of the Saw Mill, still remain. A few steps beyond the falls are the brick foundations of a former power plant that once provided electric power to Bedford.  Of course, the park’s namesake, the Viaduct (the Cleveland and Pittsburgh Railroad Bridge), built in 1864, and The Arch, built between 1901 and 1902, are located downstream. The Great Falls of Tinker’s Creek was the epicenter of a bustling industrial base that operated between the nineteenth and early twentieth centuries. 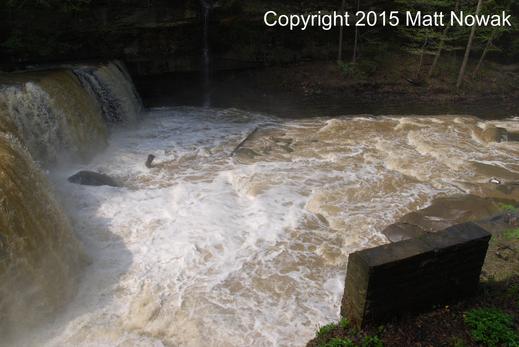 Because of the great power within the currents of Tinker’s Creek, the location near the Great Falls has been populated with many industrial buildings and constructions. Just prior to the falls is the remains of the Tinker's Creek Dam which once helped funnel water, through mill races, to the region’s commercial mills. Most of the mill race is still preserved. A bridge, called the Red Bridge, was located close to the falls to the north. It was a frequented crossing that connected the two sides of the valley. 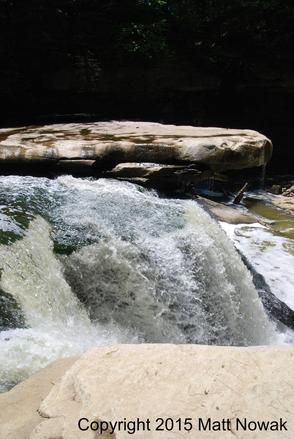 During and in the period after heavy rains, Tinker’s Creek, which is the Cuyahoga River’s largest tributary, evolves from a fairly docile but powerful creek into an unforgiving and authoritative river. This is especially seen at the waterfall where the flood water rages over the falls in impressive fashion.

A very large rock outcrop exists at the forefront of the falls. The shale has eroded considerably underneath the outcrop and it is only a matter of time before the sandstone breaks and crashes into the water below. 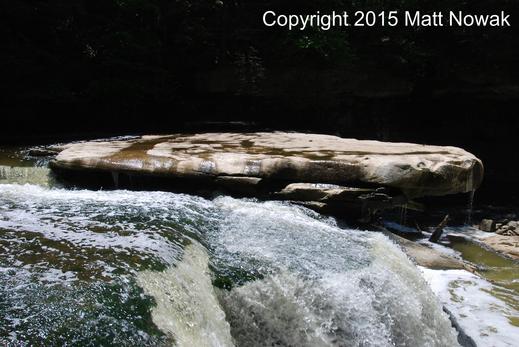 The top layer of rock on the upstream section of the Great Falls is Berea Sandstone which forms the bedrock above the falls. Downstream, the rock consists of Bedford Shale. The shale is softer and much more vulnerable to wearing down than the sandstone. As Tinker’s Creek continues to flow, the water causes the shale to erode. The erosion of the Bedford Shale causes the top layer of Berea Sandstone, which is much heavier, to fracture and fall, causing the Great Falls of Tinker’s Creek to continuously shift and recede upstream. Comparison between early photographs, depicting the waterfall from only one-hundred years ago, and the modern falls dramatically highlights this constant and ever-present transformation. 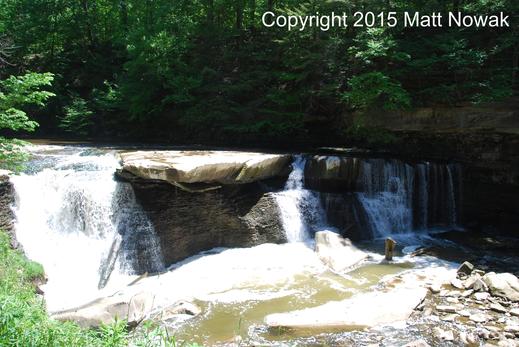 History:
The Great Falls of Tinker’s Creek is a natural and historic landmark in the Cleveland area, which has a few but not many large and well-known waterfalls. For countless years the falls have shifted along Tinker’s Creek, continuously transforming the landscape and the lives of its wild inhabitants. 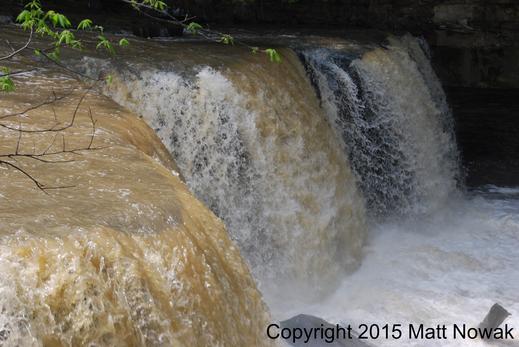