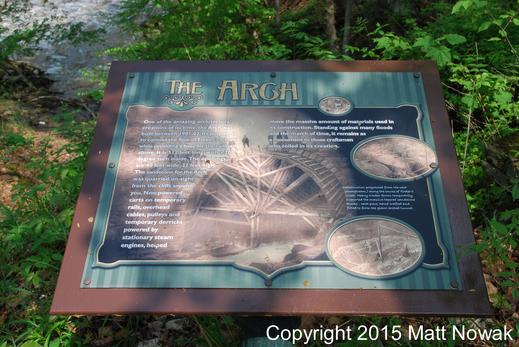 Primary Documents:
- Interpretive Historical Sign #1:
The Arch: One of the amazing architectural creations of its time, the Arch was built between 1901-02. Its purpose is to control the flow of Tinker’s Creek while providing a base for the railroad above. It is 512 feet long, with a 20 degree turn inside. The openings are 40 feet wide, 32 feet high. The sandstone for the Arch was quarried on-sight from the cliffs around you. Non-powered carts on temporary rails, overhead cables, pulleys and temporary derricks powered by stationary steam engines, helped move the massive amount of materials used in its construction. Standing against many floods and the march of time, it remains as a monument to those craftsmen who toiled in its creation.

Construction progressed from the west (downstream) along the course of Tinker’s Creek. Heavy timber forms temporarily supported the massive tapered sandstone blocks – each piece, hand crafted and fitted to form the giant-arched tunnel.

Figure 4 View of arch and wall. 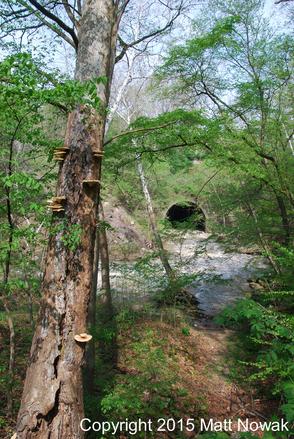 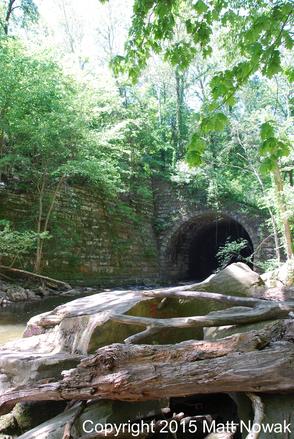 In order to keep Tinker’s Creek flowing, the company also built a mammoth engineering marvel known as the “Arch” below the viaduct and landfill. The Arch, a 512 foot long tunnel with a 20 degree turn, continues to provide stability for the rail lines as well as control the creek and help prevent flooding. The large openings are both forty feet wide and thirty-two feet high. The Arch’s stone type – handcrafted sandstone – was quarried right on site from the cliffs around the creek. A temporary system of derricks, overhead cables, pulleys, rails, and non-powered carts allowed the stones to be transported to the construction site, as well as create the massive tunnel.[1]


Figure 3 View of Tinker's Creek as it enters 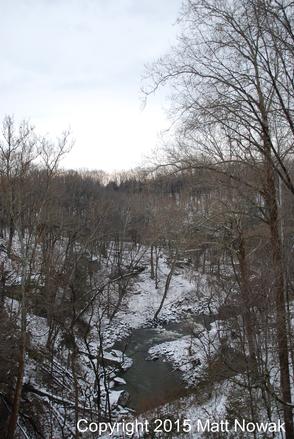 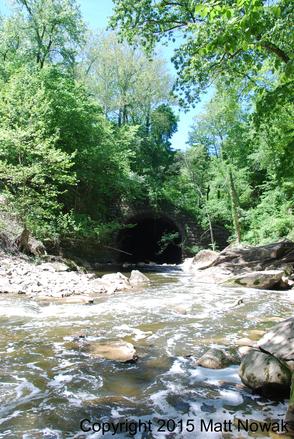 History:
By the beginning of the twentieth century, the railroad company operating the Cleveland and Pittsburgh Railroad Bridge had decided it needed a better, more efficient means to travel over Tinker's Creek. They built two new rail lines and abandoned the old bridge. In order to provide stability for the two newer rail lines, the company filled in the land below the old bridge. This would avoid the problems of maintaining a newer and larger bridge while adding support for the heavier locomotives and cargo. As a result, the Cleveland and Pittsburgh Railroad Bridge lost about half of its height and one of its arches.