NS 7700 from on top the Cleveland & Pittsburgh Railroad Bridge:

The following are two videos. The first is a short video documenting various elements of the bridge. The second video is of Norfolk Southern Engine #7700 traveling on the (relatively) newer 1901-1902 rail line adjacent to the old bridge. The video is from on top the Cleveland and Pittsburgh Railroad Bridge. 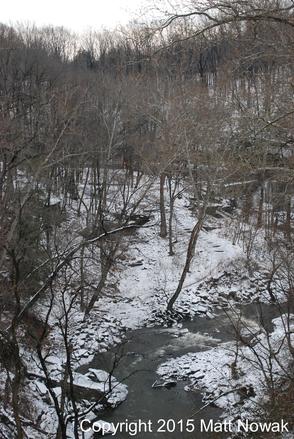 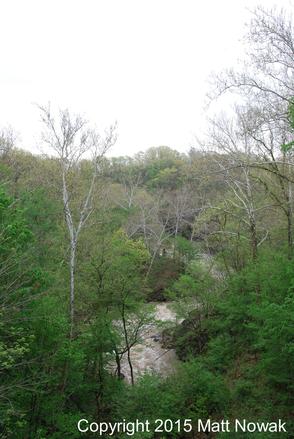 Preservation:
The bridge is currently abandoned but is an integral part of the new Bedford Viaduct Park (named after the bridge), part of the Cleveland Metroparks. It was placed on the National Register of Historic Places (NRHP) in 1975. A new deck and railings were added allowing park visitors to walk the bridge and gain access to some great views of the creek. Considering the bridge is the anchor of a Metropark, and the recent rehabilitation that added railings, a new deck, stairs and abutment, the future of the bridge seems pretty secure for the time being. 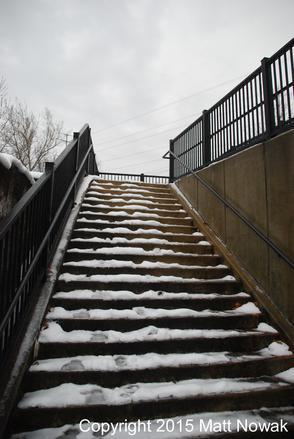 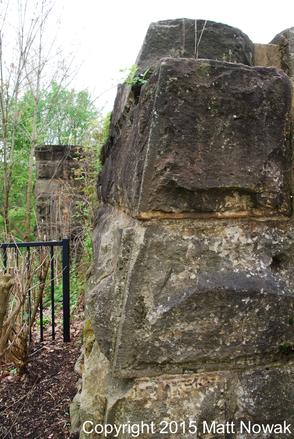 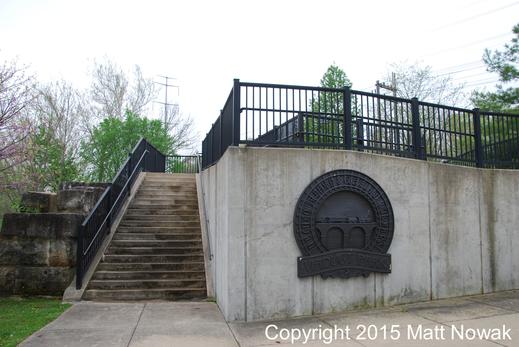 In order to provide stability for the new rail lines and heaver locomotives and cargo, the railroad company decided to fill in the land below the old viaduct. The creation of the large landfill embankment resulted in the covering of one of the bridge’s arches as well as the lower portions of all the piers in 1901-1902. In order to keep Tinker’s Creek flowing, the company also built a mammoth engineering marvel known as

The “Arch” below the viaduct and landfill.

Figure 5 The modern rail lines located next to the bridge. Photo taken 5/29/14. 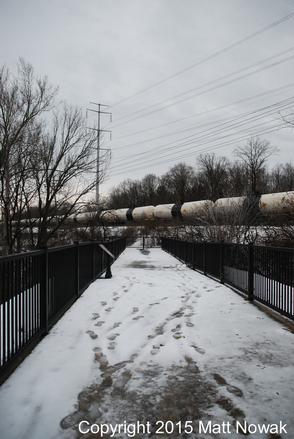 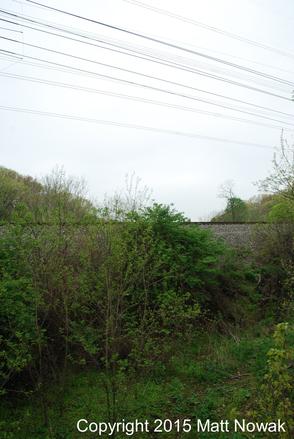 The first bridge in the present location of the Cleveland and Pittsburgh Railroad Bridge was a wooden trestle, first opened in 1852.[5] This wooden truss structure was replaced in 1864 with the present stone arch bridge. The bridge stood unaltered until 1901, when the railroad company changed the rail line, abandoning the bridge. A two-lane railroad was built next to the abandoned bridge, which is still in current use.

Figure 3 Close-up of one of the arches. 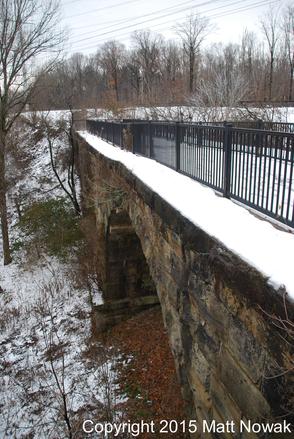 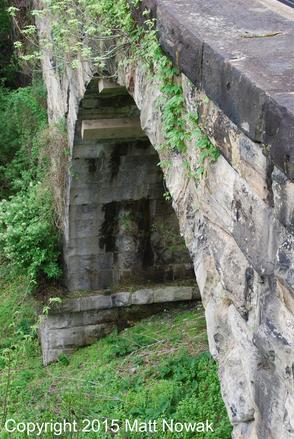 The first railroad to serve the city of Cleveland was the Cleveland and Pittsburgh Railroad, which was organized on March 14th, 1836.[2] It was created by businessmen under the original name Cleveland, Warren, and Pittsburgh Railroad with the intention to connect Cleveland, the Ohio River, and Pittsburgh. Due to financial windfalls, however, the railroad was reorganized and dropped Warren from its name in 1845. The carefully selected route soon became one of the nation’s heaviest used, carrying “iron ore from docks on [Cleveland’s] lake front to the mills of Pittsburgh.”[3] It took a number of years to connect the two cities, however. On March 23rd, 1847, a plea for public-supported money proved fruitful when, the following April, Cleveland voters approved to give $200,000 towards the further construction of the railroad. It eventually reached Hudson three years later and Pittsburgh a few more years after that. On March 4th, 1852, a train consisting of the mayor of Cleveland and the City Council celebrated as it arrived in Wellsville, a small village along the Ohio River in Columbiana County, Ohio.[4] 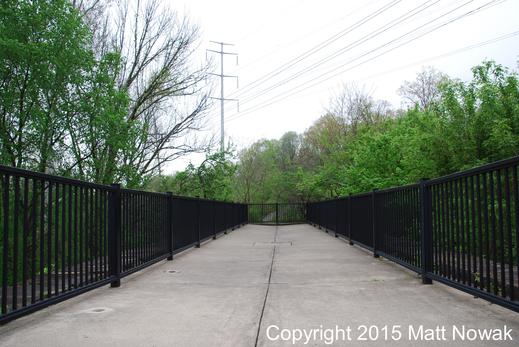 History:
The bridge has been referred to by a few names, including the Cleveland and Pittsburgh Railroad Bridge, the Bedford Viaduct, and the Tinker’s Creek Bridge.[1] It was built during the midst of the American Civil War in 1864 and eventually altered in 1901-1902. 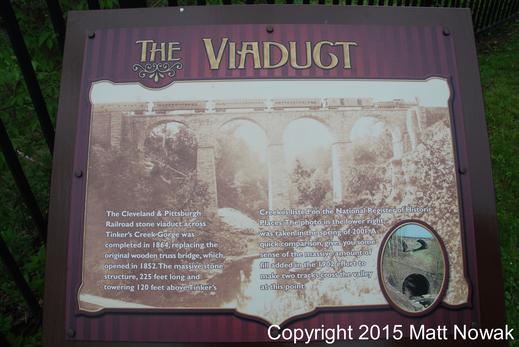 The Viaduct: The Cleveland & Pittsburgh Railroad stone viaduct across Tinker’s Creek Gorge was completed in 1864, replacing the original wooden truss bridge, which opened in 1852. The massive stone structure, 225 feet long and towering 120 feet above Tinker’s Creek is listed on the National Register of Historic Places. The photo in the lower right, was taken in the spring of 2001. A quick comparison, gives you some sense of the massive amount of fill added in the 1902 effort to make two tracks cross the valley at this point. 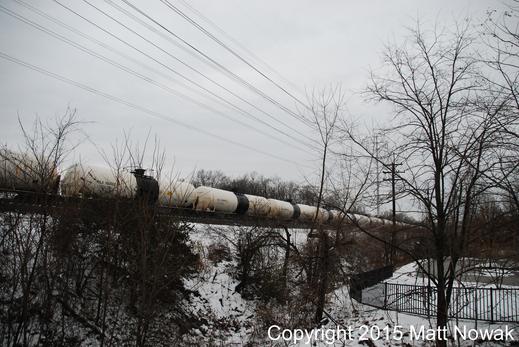 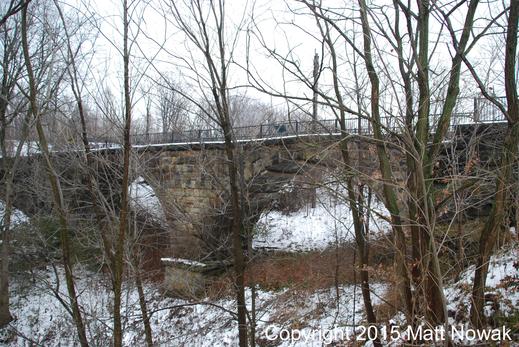 Design:
The bridge is a stone masonry arch. Its original specifications were two-hundred feet long, twenty feet wide. Four masonry aches, each about fifty feet wide, helped to carry one railroad track, and the entire structure stood about one-hundred feet above the creek bed.[6]