W. Reid Thomas makes the point that the rehabilitation was a restoration and not a reconstruction. This is due to the high amount of “historic fabric” that had survived the fire and was later reincorporated into the rehabilitation.[16] This fact is one of the main reasons the property was still eligible for NRHP (National Register of Historic Places) status, which it thankfully achieved shortly after its restoration. Restoration is preferable to reconstruction for obvious reasons. 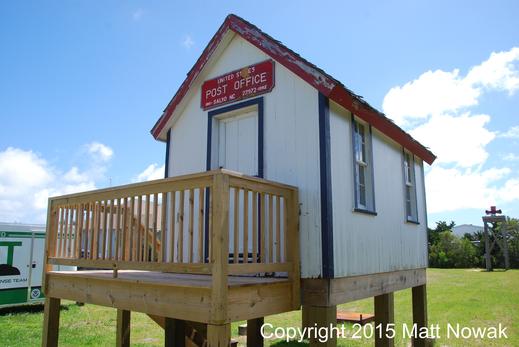 Preservation:
On October 7th, 1992, the building was badly damaged during a fire that also damaged a nearby store. An arsonist broke into the post building and set it ablaze. W. Reid Thomas describes the extent of the damage, listing and summarizing the surviving elements: “The floor, exterior walls and roof remained standing. Most of the framing, windows, some flooring, interior paneling, and exterior sheathing survived in varying degrees of condition” and “Approximately one-hundred percent of the floor frame, seventy-five percent of the wall frame, and twenty-five percent of the roof frame were sound enough to be preserved in place.”[11] A majority of the vertical sheathing, paneling, and floor, and the entirety of the ceiling and partition wall, as well as one of the windows, were beyond repair.[12]

Thankfully, local and state leaders decided to restore, and not demolish, the ailing building. Supervised by the North Carolina State Historic Preservation Office, a complete restoration was undertaken. By the beginning of 1993, the building was completed, under the labor of community volunteers.[13] Prior to this fire and restoration, the building had been “virtually unaltered” during its lifetime.[14] However, according to Thomas, the restored building incorporated a “large portion of its original fabric.”[15] Exact replicas of destroyed elements were rebuilt and integrated into the refinished building. 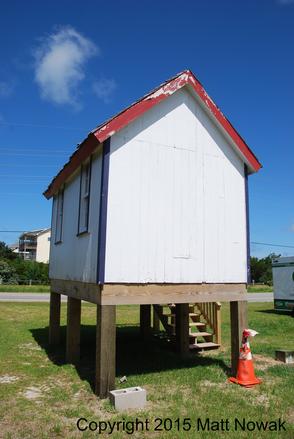 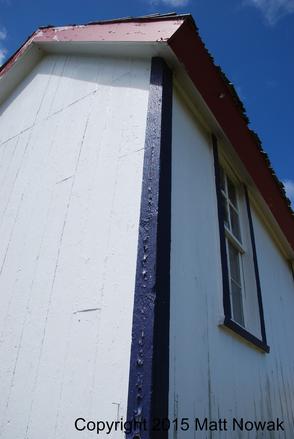 Flooding is a common calamity in the Outer Banks, which is pressed between the Atlantic Ocean to the east and the Pamlico Sound to the west. Most structures, including the post office, feature elements to combat storms and flooding. For example, the post office structure is built upon wood pilings about two feet from the ground. Likewise, two one-inch in diameter holes are located in the lobby floor that help “prevent it from being lifted off its foundation during a flood” by allowing water to leak through.[10] Thomas writes that these flood holes are common elements found on the island in other buildings from the same period. Additionally, intentional or not, the building is small enough that it can be easily moved from one location to another in case of severe storms or shore encroachment. 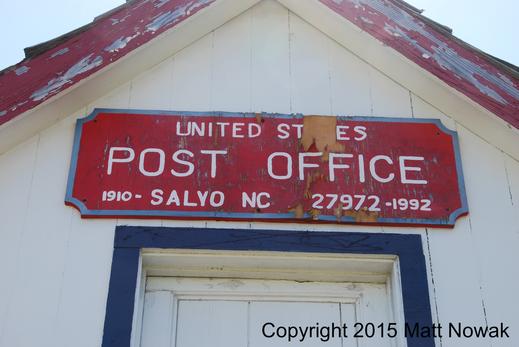 Thomas summarizes the building’s historical significance, arguing that the post office “represents the early-twentieth-century development of a regular center of postal service that was a source of pride and identity to the islanders in a remote barrier island community.”[6] Thomas concludes his nomination form in elegant but direct fashion, concluding that the Salvo Post Office “has no parallel in North Carolina.”[7]

History:
The tiny Salvo Post Office, built around 1910, served the small Outer Banks town of Salvo for over ninety years before it was badly burned by an arsonist in October 1992. The post office has the distinction of being the second smallest post office building and perhaps the first portable version in the United States.[1] The population of Salvo in 1910, the year the post office was likely built, was seventy-seven.[2]

W. Reid Thomas, the author of the building’s National Register of Historic Places nomination form, writes that, according to tradition, the post office was originally built by the husband of Marcie Douglas, the first postmistress.[3] Her husband, Lafayette Douglas, was a carpenter and fisherman and the post office operated out of their kitchen. Originally, post offices in the region were located in stores and houses and rarely had their own separate buildings.[4] For example, Salvo’s first post office, established in 1901, was located in a “shed room” on the front porch of the first postmaster, a blind Methodist minister by the name of Kenneth R. Pugh.[5] The Salvo Post Office is significant because it was a departure from that trend. Since then, the building has been moved to the property of each of the succeeding postmasters until it eventually was relocated to its present site. 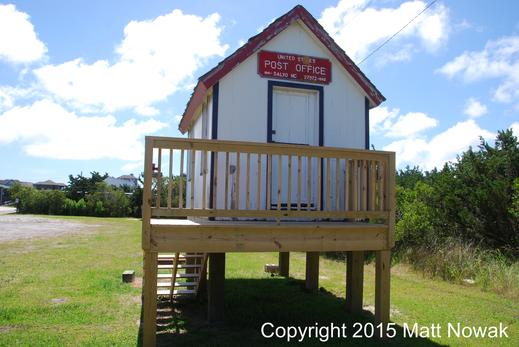 It is important to remember, however, that natural disasters (like floods and storms) or crimes (like arson and vandalism) can damage and even destroy historic properties. If given the option between reconstruction and demolition, reconstruction is always better, even if the reconstructed structure lacks original materials. This is because people can still learn about our past through reconstructions. Communities like Salvo need to be applauded for preserving their history (and to a wider extent, our history) by restoring properties that have been damaged by people, nature, time, and neglect. All too often we take the easy route in regards to preserving our past. Luckily, the Salvo Post Office retained enough original material to be rehabilitated and appreciated by visitors of all walks of life.

The arson fire was the impetus for the U.S. Postal Service to consolidate and construct a new post office for all of Chicamacomico, the three towns of Salvo, Waves, and Rodanthe. Located in the same area of the old Salvo Post Office is an Emergency Siren Tower, which can be seen in the background of Figure 7. 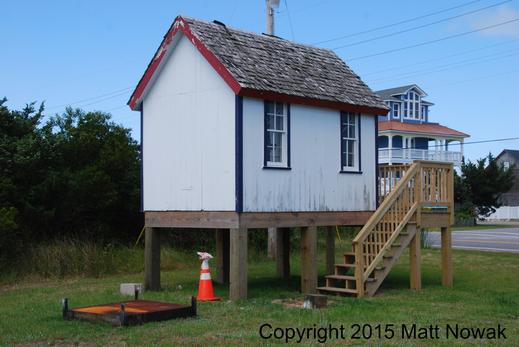 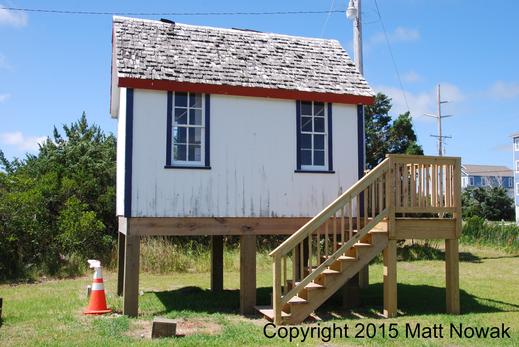 Design:
W. Reid Thomas describes the rectangular-shaped post office’s design as such: “The one-bay-wide, two-bay-deep building exemplifies the traditional gable-front vernacular form. The interior is divided into two very small rooms; the post office lobby and the postmaster's workroom…Both side elevations feature two four-over-four sash windows with pegged mortise-and tenon joints.”[8] The building itself is a great example of an infrequent type of regional post office.[9] 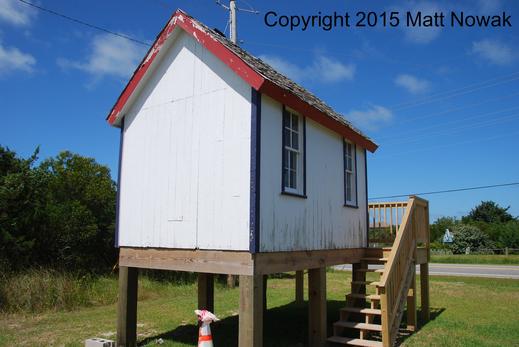