Figure 10 View from the opposite side.

Figure 9 Side-angle of the two stories. 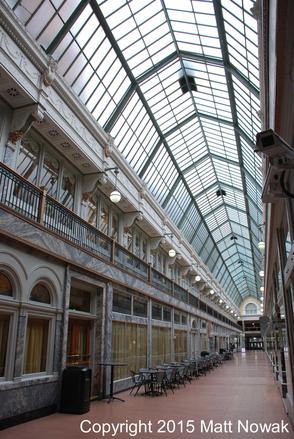 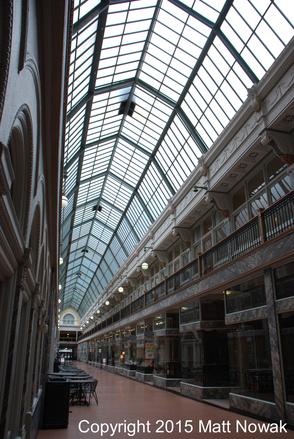 Similar to the Cleveland Arcade, the Colonial Arcade uses a large glass ceiling and iron elements, with ornate ceiling designs and fixtures. It is two stories and utilizes the sun for natural light which is filtered through a gabled skylight. According to the National Register of Historic Places nomination form, the Arcade exhibits “a dentilled cornice, egg and dart molding, and scrolled brackets that divide the interior’s second floor storefronts.”[11] The floor of the first story is composed of linoleum, while pink marble adorns the second story.[12]

Preservation:
The building is highly significant as it represents one of only three surviving arcades in Cleveland, of which four were built. The arcade was relatively recently updated, including an expansion that connects it with the parallel Euclid Arcade. While the arcades are currently treasured by the city, the lack of commercial development within them may prove troubling in the future, especially if owners decide to redevelop either the location or the arcades themselves, possibly changing their appearances, natures, and historical significances. Thankfully,  almost one-hundred years after it was built, the Colonial Arcade (along with the Euclid Arcade) was placed on the National Register of Historical Places in 1987, making it difficult for any situation involving demolition or destruction to succeed. 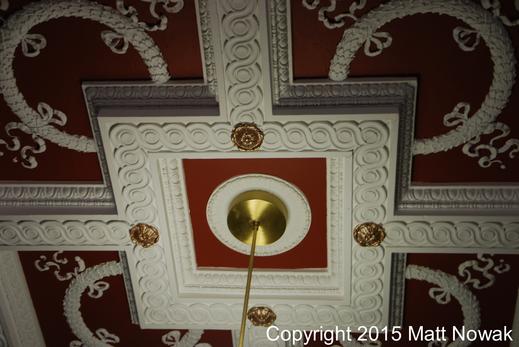 Design:
All three of Cleveland’s arcades are excellent examples of the arcade movement that swept the country in the late nineteenth and early twentieth centuries. The design of the Colonial Arcade itself is Colonial Revival, a type of architecture that was in part inspired by the U.S.’s centennial in 1876.[8] The Colonial Revival movement sought to promote patriotism, morality, and democracy through its architectural ties to the colonial period and American Revolution. In all, the Colonial Arcade is 435 feet long, twenty feet wide, and twenty-eight feet high.[9] The architect of both the Colonial Arcade and Colonial Hotel was George H. Smith, who helped in the creation of the Cleveland Arcade as well.[10] 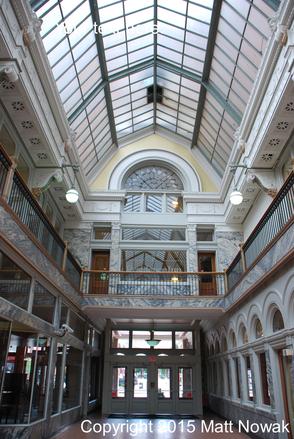 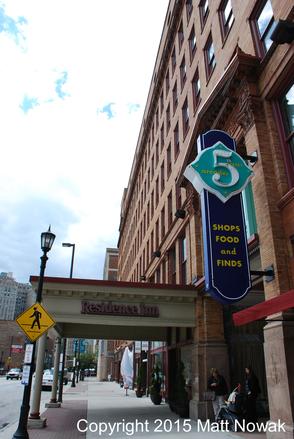 In 2000, a $30 million rehabilitation project connected the Colonial Arcade with the nearby Euclid Arcade by means of a food court. Above the arcades is a 175-room Residence Inn Cleveland Downtown. One tenet in particular, Colonial Coin & Stamp, has kept open a shop at the arcade since 1921.[7] Other names of the arcades include the 5th Street Arcades and the Colonial Marketplace.

Figure 5 Entrance to the Colonial Arcade. 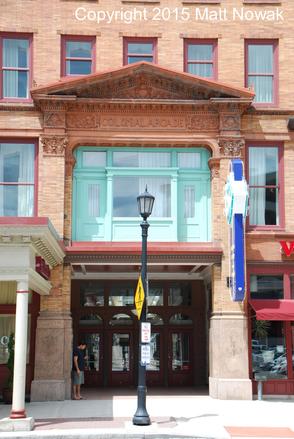 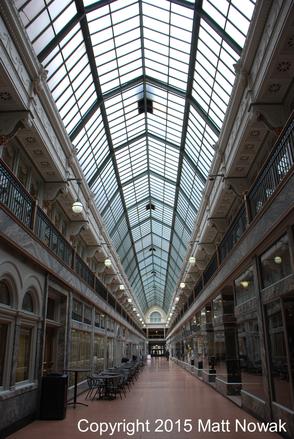 The Kendall building, having been built in 1887, is the oldest building in the arcade complex. The building “fronts 90 feet on Euclid Avenue and is 80 feet wide.”[3] It originally featured projecting bays but was altered and resurfaced in 1929. The architectural firm Walker and Weeks, on behalf of tenant Schultze-United Company, created the new façade of granite terracotta, which gave it a Modernistic look.[4] If one looks close enough, the original location of the company sign can be spotted, due to the lighter (and whiter) color of façade panels (see photo above).[5] Clevelanders will note many of Walker and Weeks' other works, including the Cleveland Public Library and the former Municipal Stadium.[6]. 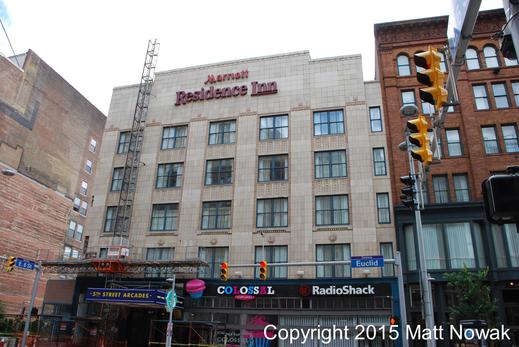 Traditionally, the first floor of the arcade has housed retail space and the second floor office space. Like the other two arcades in the area, the Colonial Arcade was once a bustling center of commerce, complete with shops and stores, restaurants, entertainment areas, and offices. It linked the Colonial Hotel, built in 1898, with the Kendall Building. 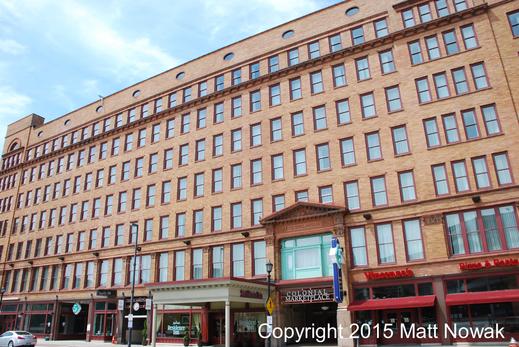 History:
The Colonial Arcade was built in 1898 along with the connecting Colonial Hotel. The hotel’s location on Prospect Avenue allowed the arcade to connect the structure to Euclid Avenue. Due to the nature of the arcade, it is associated with several of the nearby buildings, including the Euclid Arcade (built in 1911), Kendall Building (built in 1887), and the William and Rodgers Building (built in 1898).[1] The hotel was constructed behind the Williams and Rodgers Building and was supposedly once a favorite of John D. Rockefeller (until he was upset when the nightly rate price increased from $1.00 to $2.00).[2] In honor of this connection, the current Residence Inn has a lounge – the John D. Rockefeller Lounge – named in his honor.