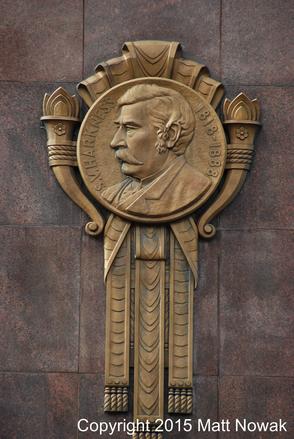 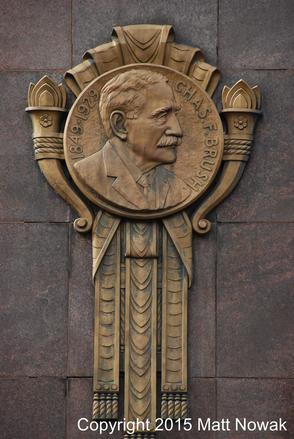 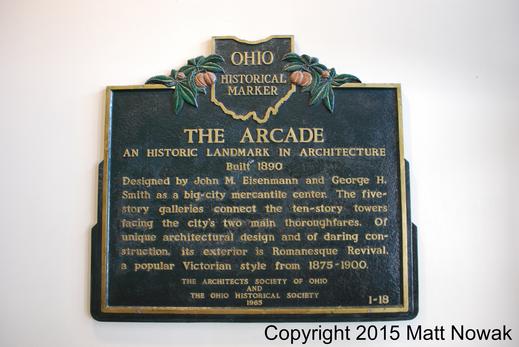 Primary Documents:
On a side note, the Ohio Historical Marker for the Arcade, placed in 1965, was the first such marker in Cuyahoga County. The two sides of the marker, numbers 1-18 and 2-18 respectively, refers to this. The first number (in this case numbers “1” and “2”) references the listing number of the marker, while second number (“18”) denotes the county. Alphabetically, Cuyahoga County is the eighteenth county in the state. The Cleveland Arcade’s historical marker is the first (side one) and second (side two) marker in the county.

The Arcade AN HISTORIC LANDMARK IN ARCHITECTURE Built 1890
Designed by John M. Eisenmann and George H. Smith as a big-city mercantile center. The five-story galleries connect the ten-story towers facing the city’s two main throughfares. Of unique architectural design and of daring construction, its exterior is Romanesque Revival, a popular Victorian style from 1875-1900.
The Architects Society of Ohio and The Ohio Historical Society 1965 1-18. 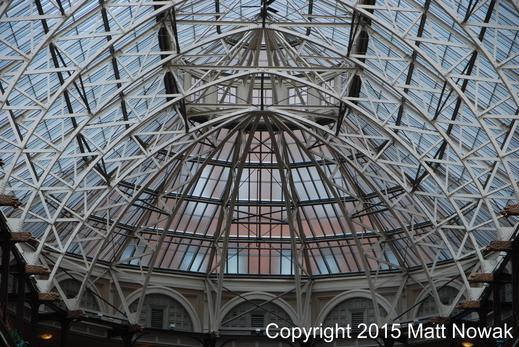 Figure 13 Side view of ceiling. 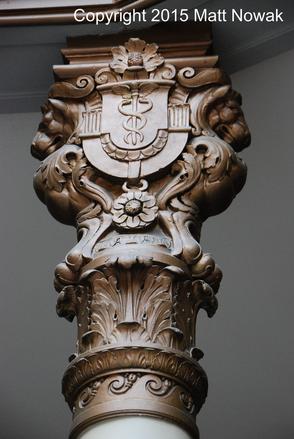 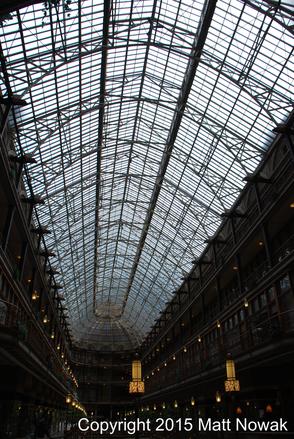 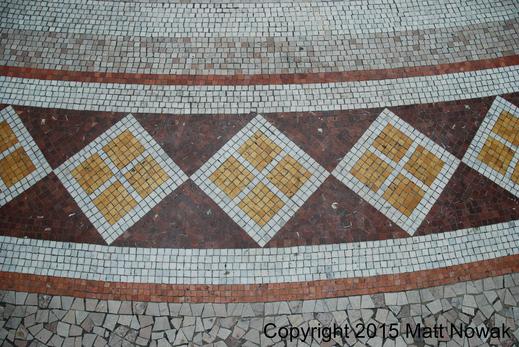 Thankfully, the arcade has received the attention and accolades it deserves. In 1973, the arcade was listed on the National Register of Historic Places (NRHP). A few short years later, in 1975, the property was placed on the National Historic Landmarks (NHL). The rare NHL designation marks the Cleveland Arcade as a national landmark, citing its national significance. The arcade is also an integral part of Cleveland’s rich arcade history. Nearby the Cleveland Arcade are both the Colonial Arcade and Euclid Arcade as well. Because of these designations and the continued popularity and investment of the property itself, the Cleveland Arcade’s future is firmly secured.

Figure 11 Decorated for a wedding. 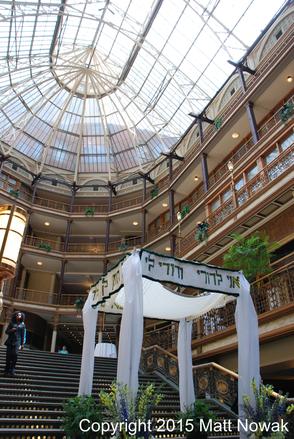 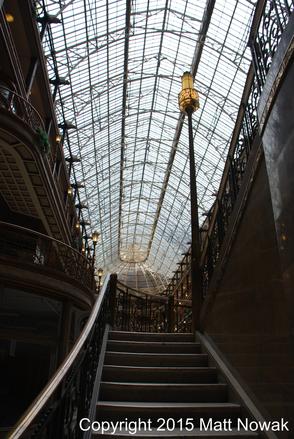 In 2001, the arcade was renovated by Hyatt. The arcade’s new life as a modern hotel has helped drive commercialization within the arcade. Likewise, the arcade is a popular spot for wedding receptions. In 2014, it was announced that the 293-room Hyatt Regency hotel would receive a $6 million renovation.[15] The continued success of the hotel, in addition to continued upgrades and renovations, will undoubtedly keep the Cleveland Arcade as an historical and cultural anchor in the city. 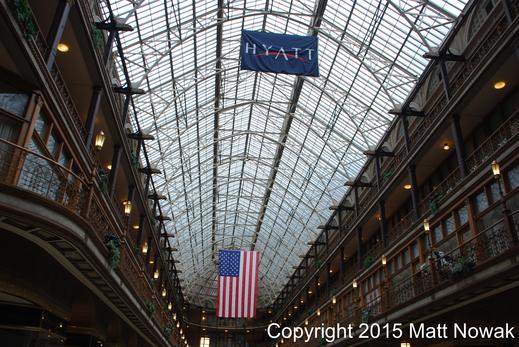 Preservation:
Since its construction in 1890, the Cleveland Arcade has undergone a few transformations. The building’s lighting system has been updated over the years, while the stairs have been altered as well. In 1909, electricity replaced the hydraulic system in the elevators. Unfortunately, in 1939 the Euclid Avenue entrance was changed and a large Richardsonian Romanesque-styled arch was removed which created the square-like entry seen today.[14] 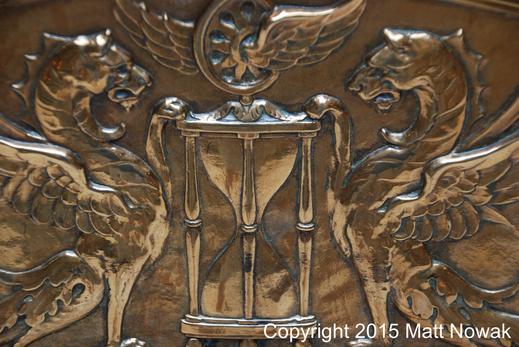 One of the interesting aspects of the Cleveland Arcade is its subtle uneven nature; the Euclid Avenue portion is actually twelve feet higher than its Superior Avenue counterpart. This unevenness is due to Cleveland’s natural landscape; the location’s foundations were built upon sandy soil and quicksand subsoil.[12] To solve this issue, the designers needed to build the two entrances at different levels, connecting each level with a large staircase. As such, there is a slight downward grade towards the Superior Avenue entrance. Each office building contains nine stories while the arcade itself has five gallery levels.[13] Arcades were the forerunner to modern shopping malls, where many different stores were placed under a single larger roof. 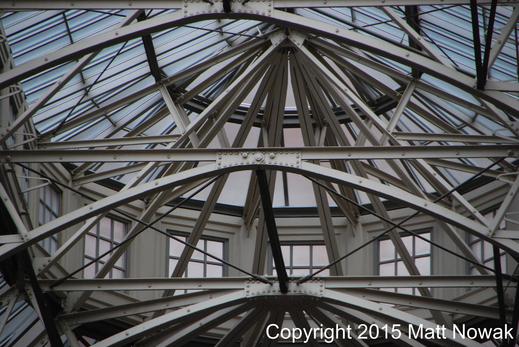 The arcade’s beautiful and massive ceiling is comprised of glass panels and pin-connected steel trusses that stretch over sixty feet.[8] The ceiling and elegant interior details, including highly decorated railings, Roman Mosaic floor tiles, and other elements of marble and concrete, vividly contrast with the bold external facades. Carolyn Pitts describes this contrast, arguing that “The heavy Romanesque-Revival exterior of rusticated sandstone with brick above contrast dramatically with the thin, elegant structural members within.”[9] Pitts goes further to describe the interior, with its truss arches and intricate wrought iron railings, as “web-like.”[10] The Historic American Buildings Survey (HABS) also refers to this “web-like” design as a “light skeletal effect.”[11] 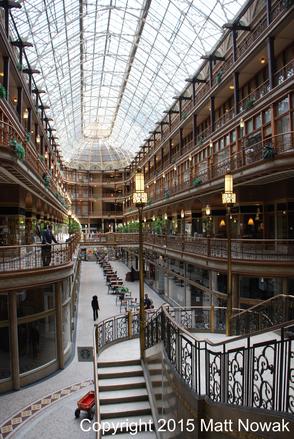 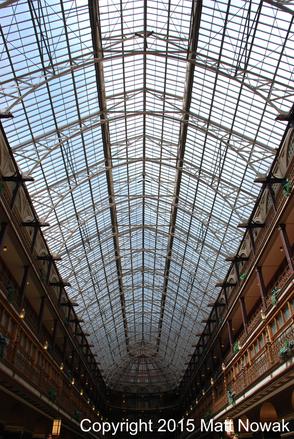 The arcade was built to connect Euclid and Superior Avenues and is 300 feet long. At the time of the arcade’s construction, Superior Avenue was the busier of the two streets. Over time, however, Euclid overtook Superior as the more popular street.[5] According to Carolyn Pitts, the author of the arcade’s official National Register of Historic Places nomination form, the arcade’s building plans were so complicated that the original contractors were replaced with a bridge company, the Detroit Bridge Company.[6] This is in part due to the controversial nature of the arcade’s roof. There are no tie-rods to counteract the thrust of the roof. Instead, the thrust is counteracted by a “system of cross bracing between the outer columns of the arcade section of the building and the floor beams, sheathed by masonry connected with the outer wall for greater stability.”[7] This was a mild controversy at the time. 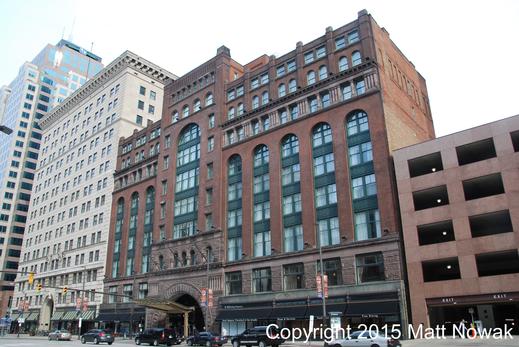 The Cleveland Arcade has featured at least one major event. In June 1895, the arcade hosted the National Convention of Republican Clubs. The two major speakers of the event were Ohioans, Senator Mark Hanna and Ohio governor and future-president William McKinley.[4] As president, McKinley would be assassinated six years later, in 1901, by anarchist Leon Czolgosz.

At the time of the arcade's commissioning, John Eisenmann was a professor of Civil Engineering at the Case School of Applied Sciences and Superintendent of Cleveland Parks. A few years after the opening of the Cleveland Arcade, George H. Smith would design another one of Cleveland’s attractive buildings, the Colonial Arcade (and Colonial Hotel) in 1898. J. M. Curtiss was a real estate broker, while Myron T. Herrick was a banker.[3] Charles F. Brush, of course, is the famous inventor of the arc light and the automatic wind turbine. Brush High School, in Lyndhurst, is named in his honor. 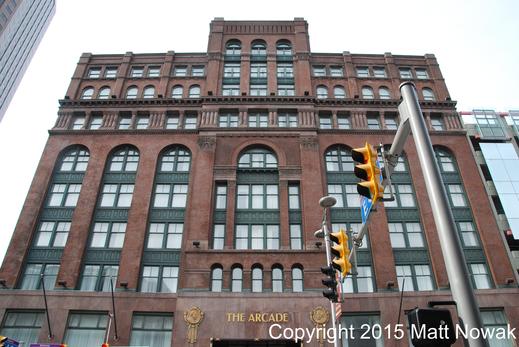 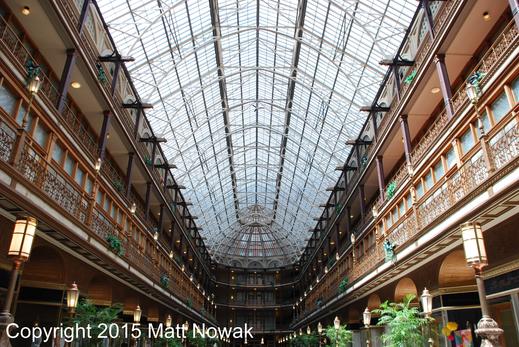 History:
The Cleveland Arcade is one of Cleveland’s most famous and architecturally significant buildings. On May 31, 1888, the first footing stone of the arcade was laid in place. Exactly two years later to the month, in May 1890, the Cleveland Arcade was officially opened.[1] 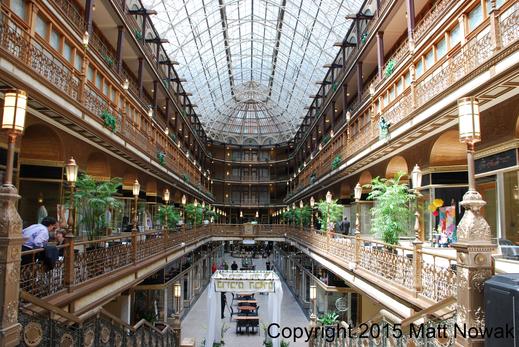