History:
This small railroad girder bridge runs parallel to the Lisbon Street Bridge and can be seen from that bridge’s eastern sidewalk. The girder bridge, which is composed of either two tracks or two separate bridges on the same abutments, is a typical example of a common railroad bridge type. Rehabilitation work seems to have occurred at some point, with concrete having been added to the abutments and wing walls to reinforce the original stone abutments. It is owned and operated by Norfolk Southern.

The bridge lies at the very point in which Little Yellow Creek flows into the Ohio River, acting effectively as a gateway. Located nearby are some recreational docks for boats which infer the frequent movement of peoples under the bridge to access the much larger Ohio River.

Unfortunately, the bridge is difficult to photograph as it is only accessible from the water or from private property. 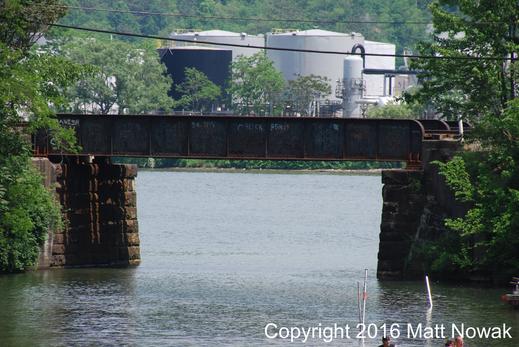