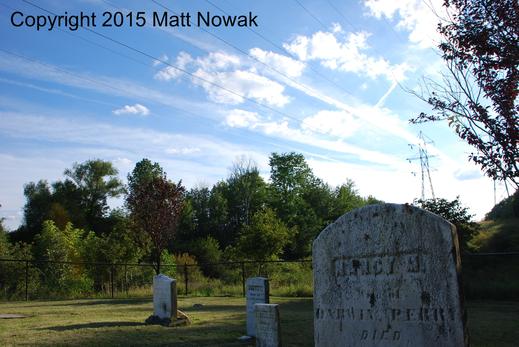 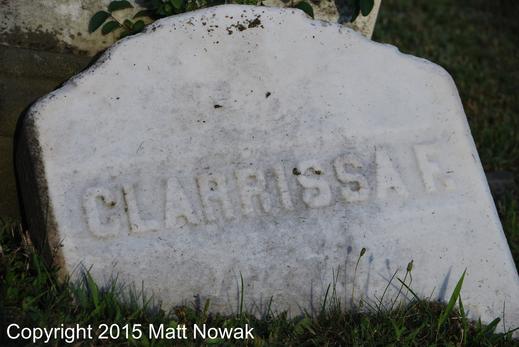 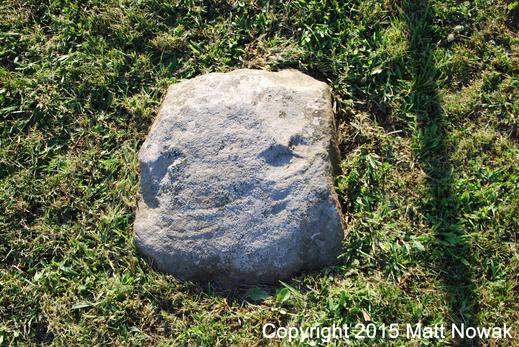 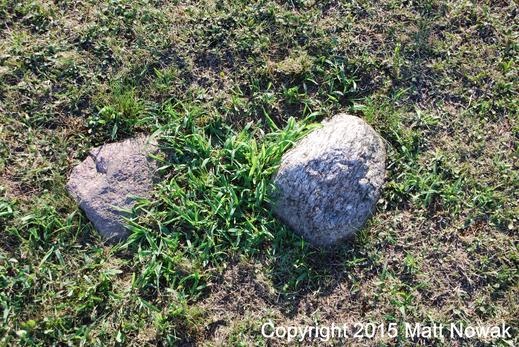 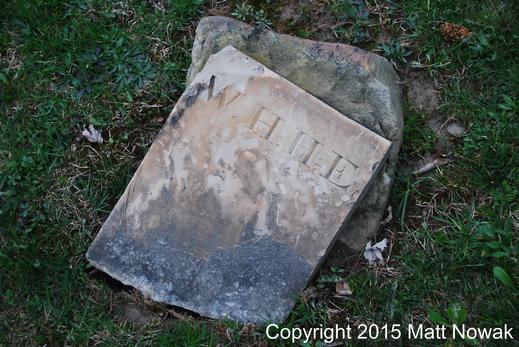 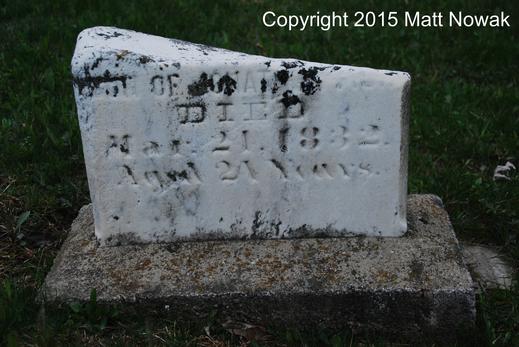 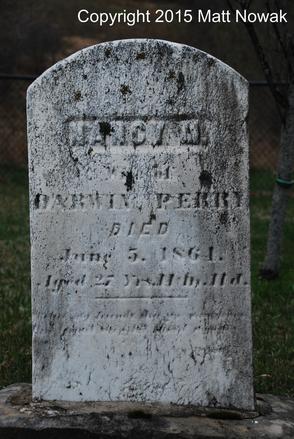 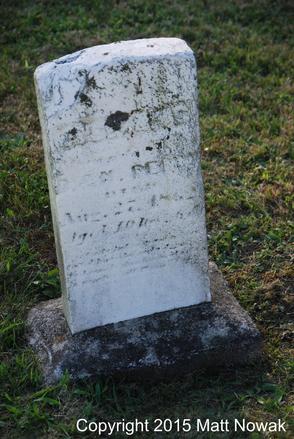 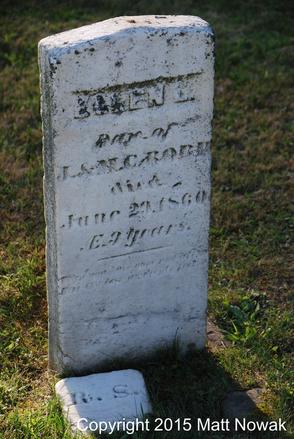 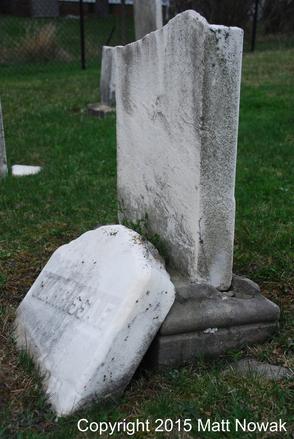 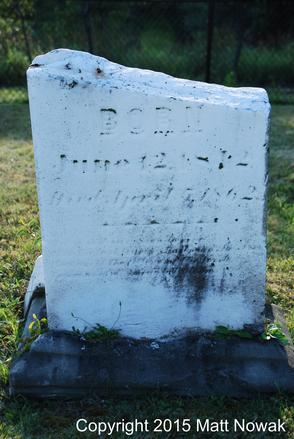 Grave #1 Text: In Memory of / William Henry Harrison Eggleston / who Died Feb 27th 1843 / Aged 1 Year IV Months XV Days
The lovely babe has gone to rest / No sin to cause A sigh / Its taken from its Mothers Brest / To dwell with God on high 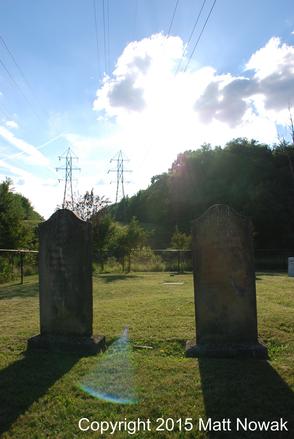 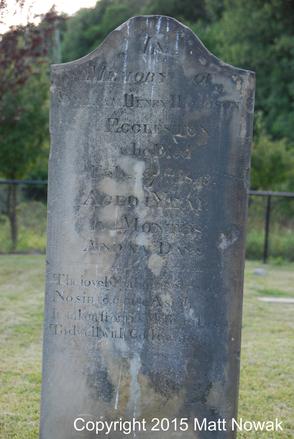 Unfortunately, every single tombstone has witnessed severe weathering. Many of the epitaphs and names are unreadable. Likewise, some of the markers are broken or completely illegible. There is also the presence of several field stones that may or may not mark the location of other graves. 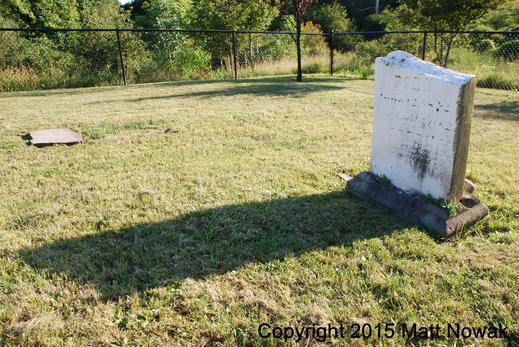 Cemeteries, however, were sometimes impermanent. Family farm plots could disappear, as Larkin concludes, “Family graveyards were sometimes “delicately kept” at first, but they often fell into neglect or obliteration within a few decades as farms passed to new owners.”[2] Parma’s Early Settlers Cemetery seems to have embodied this conclusion, as the cemetery disappeared from public consciousness and was engulfed by the surrounding woods. In the late twentieth century, local residents rediscovered the headstones and the city cleared the area and built a fence and gate around the graves. Since then the City of Parma has maintained the area. 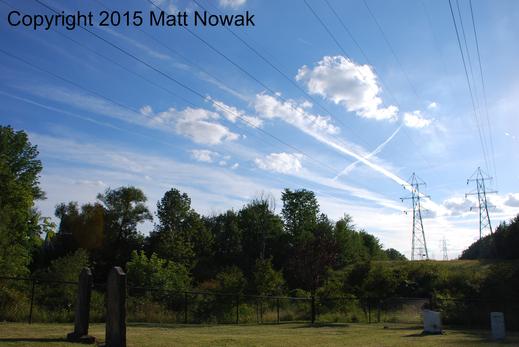 The Early Settlers Cemetery was the burial place for either a small neighborhood or, most likely, a family farmstead. Just like today, gravestones were important markers of the deceased in the early years of the Republic. Jack Larkin, discussing this period, writes that “More permanent than mourning clothes as reminders of those who had died were the graves themselves and their markers, set in the daily landscape.”[1] 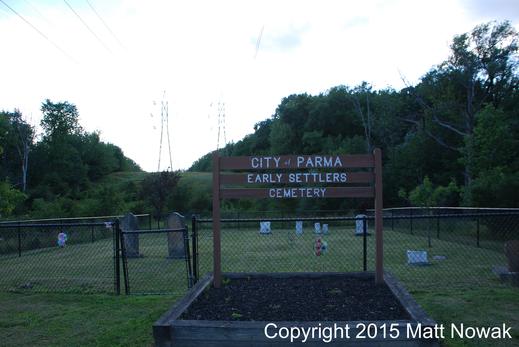 History:
In the midst of a section of residential housing is a very small and rural cemetery called the Early Settlers Cemetery. This cemetery, which dates back to at least the 1830s, is owned and operated by the City of Parma. It is located underneath large transmission towers and a small creek, perhaps unaltered, flows near the cemetery’s southern and western border. 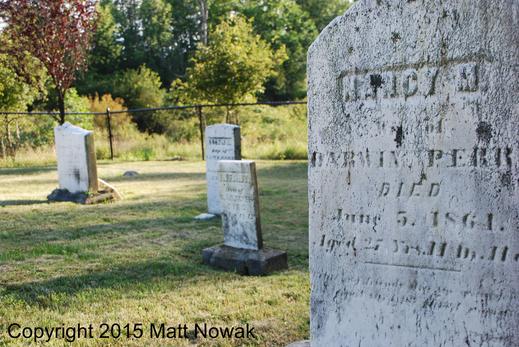 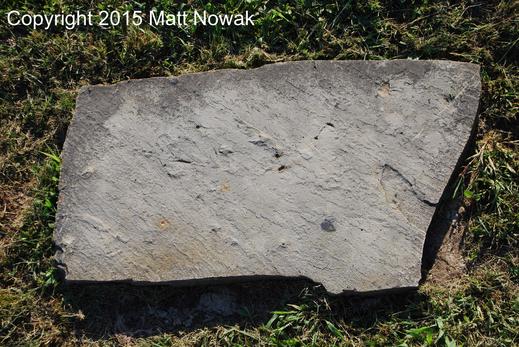 This grave features no inscriptions. If it once did, it has worn off some time ago. It also has a severe lean that should be fixed or restored soon, in order to prevent it toppling over like the nearby W.H.H.E. gravestone. 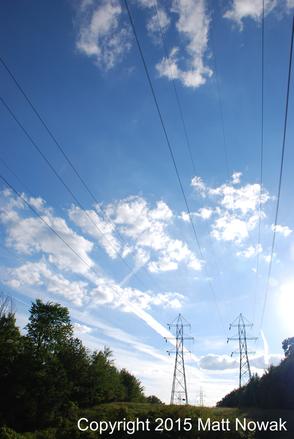 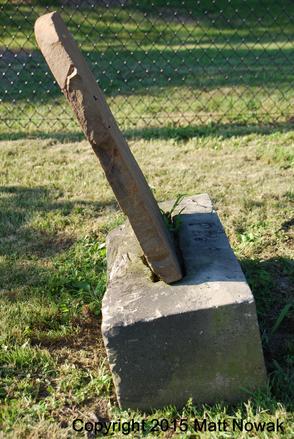 [rest of inscription is illegible] 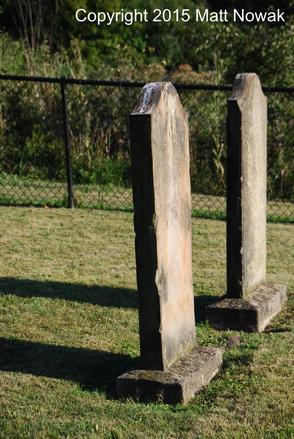 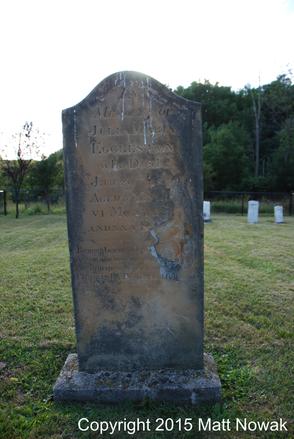