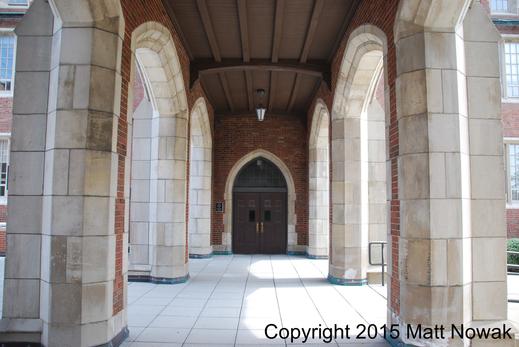 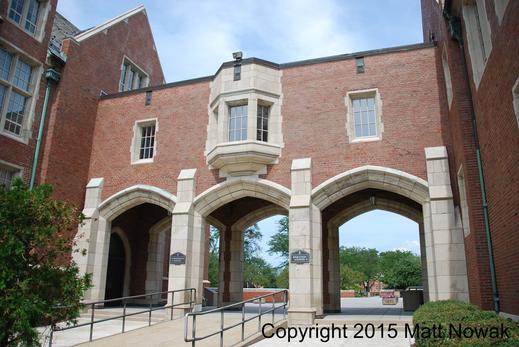 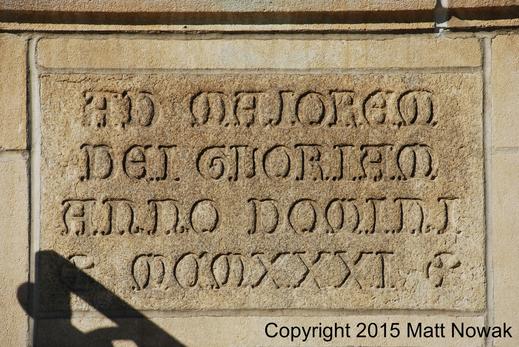 Thankfully, the beautiful tower and building complex has been maintained well. The building has continued to be beloved by the university and will be around to inspire future generations of students and residents alike. 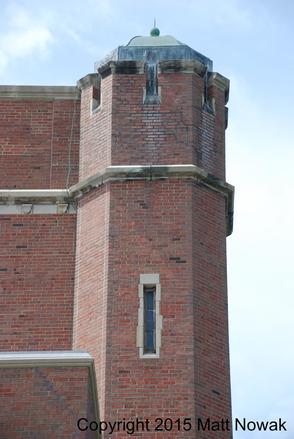 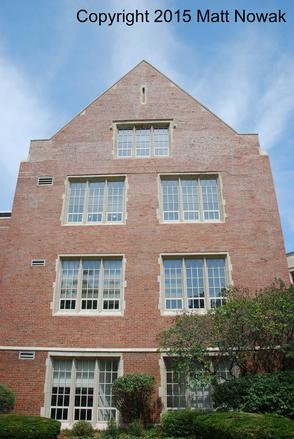 Much like the larger tower building, these wing buildings were “designed in the Gothic style long associated with academic and sacred buildings” but were “simplified version[s] of that style which was in the spirit of Depression-induced austerity.”[15] The buildings display a nice mix of intricacy and modesty in traditional form. While the decades continued to proceed and more buildings were built, the Gothic style, which heavily influenced the campus’s early buildings, continued on. “Steep roofs with brick, brick-patterned, and stone walls are characteristic of these initial buildings,” Elizabeth Murphy writes, “These materials were carried forward into the evolution of the site even as styles began to change.”[16] The design of the Administration Building, the primary building of John Carroll’s first original structures, has in some way influenced almost every building built on campus since its completion in 1935.

The tower has two historic bells. Both bells were cast in the historic McShane Foundry in Baltimore, Maryland and were gifts of Thomas A. Grasselli and his family. The larger bell was designed to ring each hour, while the smaller bell was assigned to the Angelus. The ringing of the bells was restricted in 1937 by a local ordinance.[8] 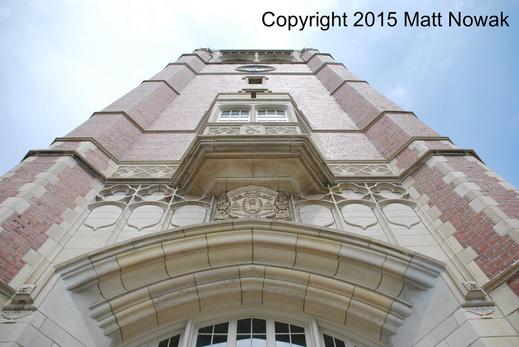 In 1935, when the school finally opened in its new location, only half of the campus was completed.[5] Classes began that year in the half finished building, as, in the words of Marian Morton, “students and faculty dodged electricians and carpenters” between classes.[6] Rodman Hall, the Jesuit residence, was not finished until 1938, and it was not uncommon to see the Jesuit teachers living in their offices in the A.D. wings during the first couple years of the new campus.[7] 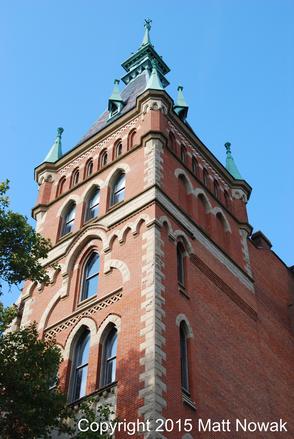 An interesting account, if not outright odd, took place during the construction of the Administration Building after the school’s decision to move from the west to east side of Cleveland. One Jesuit, Rev. Frederick Odenbach, was a famous early seismologist. A pioneer in the field and founder of the Jesuit Seismological Service, Odenbach was a professor at the school who often conducted experiments on top of the 1891 Main Building. Odenbach’s expensive and delicate equipment was moved to the new University Heights campus when construction began on the Administration Building in 1931. When construction halted in 1932 due to the Great Depression, Odenbach, with his dog Hector and pet canary, moved into the yet unfinished Grasselli Tower in part to protect his equipment.[2] While living in the tower, Fr. Odenbach had no bed and slept in an Artic sleeping bag.[3] He died a year later in 1933, perhaps due to prolonged exposure to the elements in the unheated tower, which was battered by Cleveland’s harsh winters. 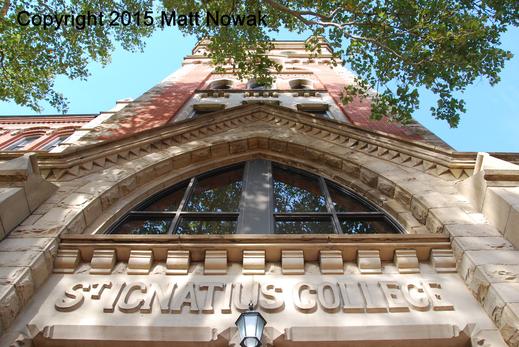 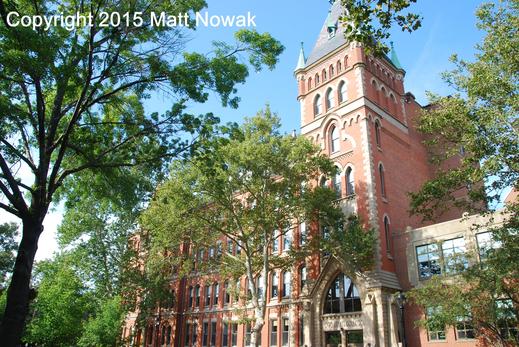 History:
The Administration Building and Grasselli Tower represent the physical embodiment and focal point of John Carroll University. To many, the tower is the heart and soul of the school and is easily the most recognizable building on campus. Built in 1935, the building, along with its many wings, has dominated the school’s campus and has continued to influence the design and layout of campus buildings to this day. 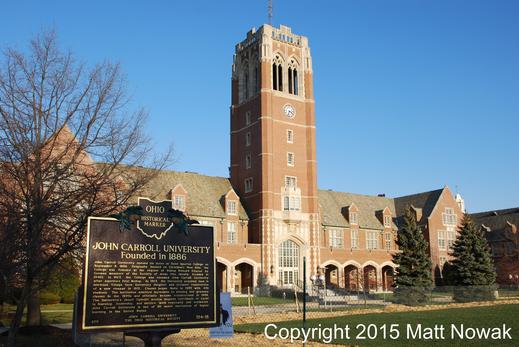 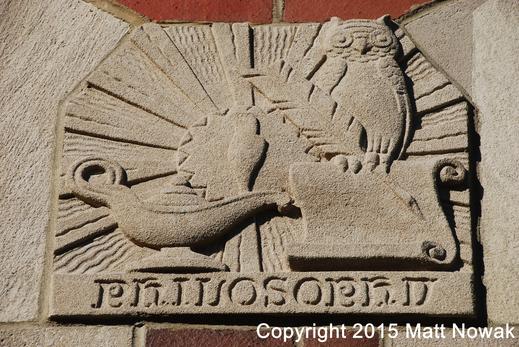 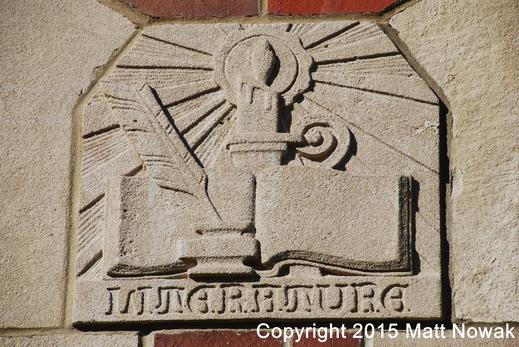 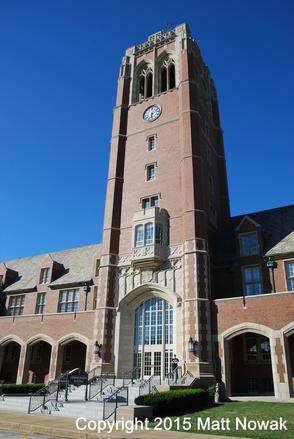 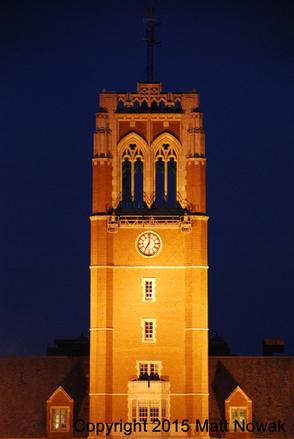 The Administration Building and Grasselli Tower are currently the “anchor building” of the John Carroll North Quad Historic District, a historic district listed on the National Register of Historic Places.[19] Since its construction in 1935, there have been three alterations to the building (1987, 1994, and 2001). However, the building retains most, if not all, of its historically significant features. The building is heavily used and well maintained and is a source of pride among faculty and students alike; it is in no danger of demolition or heavy alteration.

The main building and corresponding additions are “Collegiate Gothic in style.”[9] Elizabeth Murphy, the author of the building’s National Register of Historic Places nomination form, writes that “The main building is a two and a half story, cross gabled, stone and brick building” which is “symmetrical about the nine story bell tower; it has five bays on either side of the tower as well as two short els on each side, perpendicular to the main portion of the building.”[10] On each side of the main tower building are two “wings,” both built in 1935, and connected by means of a separate arcade. At the center of the complex is the bell tower. The tower “holds the main entrance at its base with thick turrets on its corners.”[11] A large outside clock is located on the seventh floor. The tower is named after the mother of Thomas Grasselli, an alumnus of the school’s first graduating class, and his siblings. 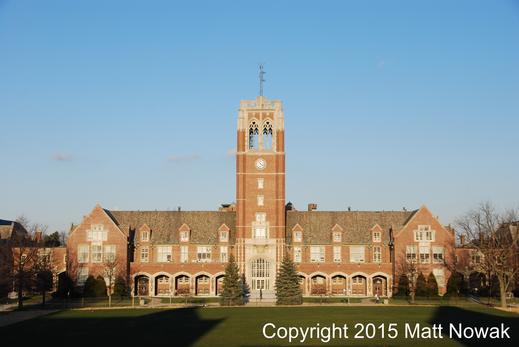 Completion of the tower was particularly emphasized during the depression. When the tower (but not the entire building) was completed, the Carroll News wrote that its construction indicated that the “dreams of Carroll are becoming reality.”[4] 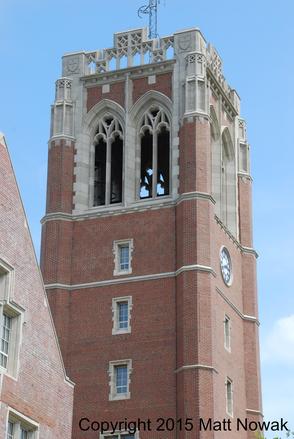 The Administration Building is, in the words of historian and John Carroll professor Marian J. Morton, “a modified 1930s version” of the original 1891 building located at St. Ignatius High School.[1] The original six-story 1891 building served as the second classroom structure for St. Ignatius College in Ohio City. The first main building at the original site, a four classroom wooden building, was later demolished after a fire. Much like St. Ignatius High School’s 1891 Main Building, which still bears the words “St. Ignatius College” over its doorway, the 1935 Administration Building is a physical reference to the school’s origins as a humble educational institution on the west side of Cleveland. 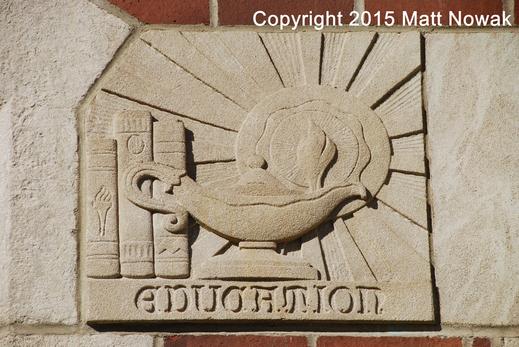 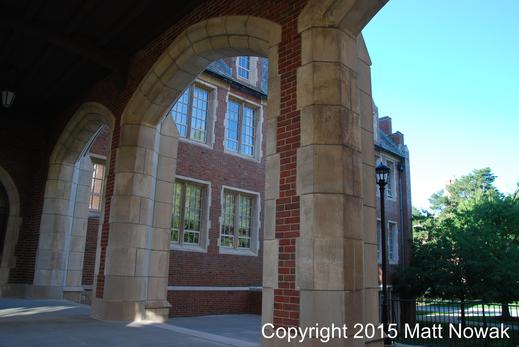 Figure 16 Grasselli Tower during the day. 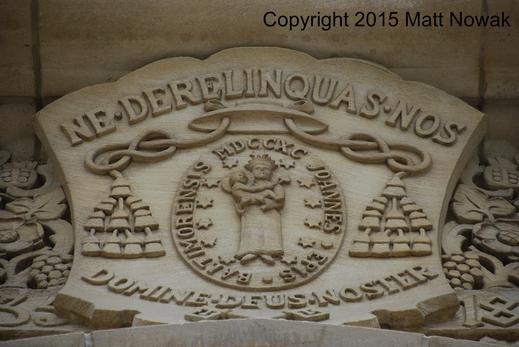 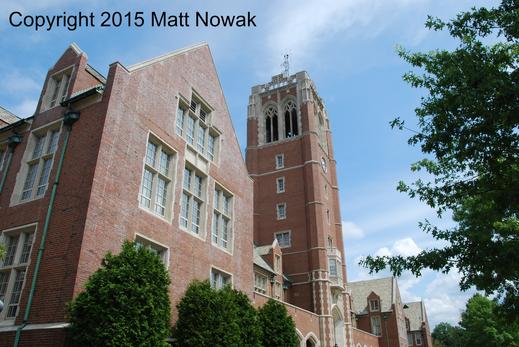 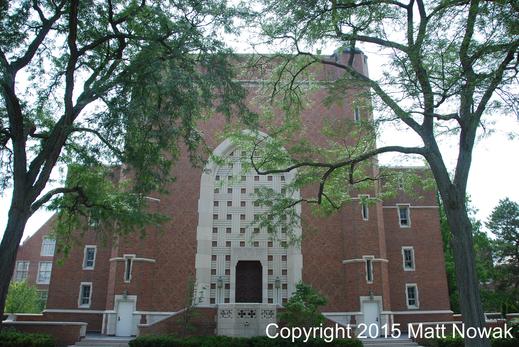 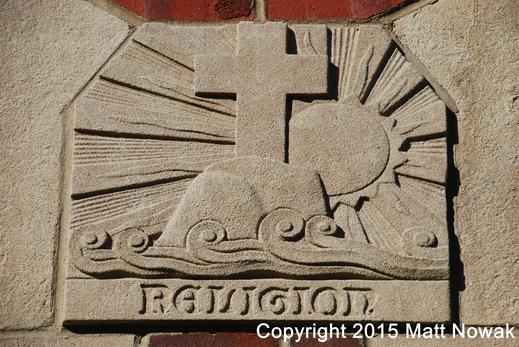 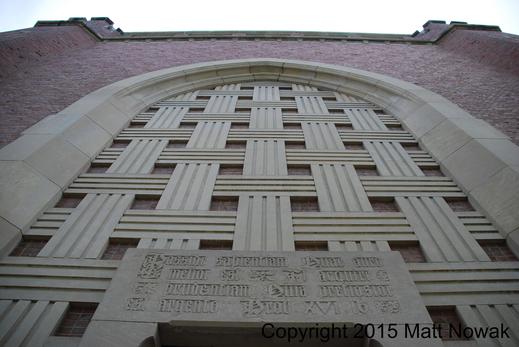 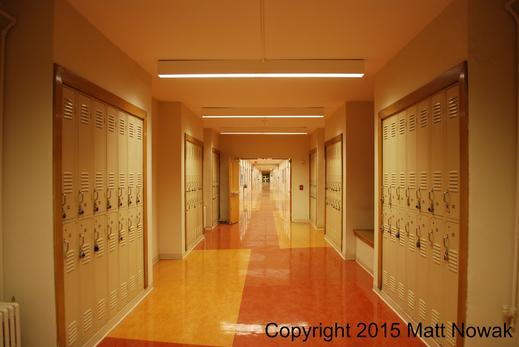 The building and tower are the focal point of the university. Donald Gavin writes that the tower “has indeed become the visible symbol of John Carroll University. Although not of great height, it does stand out particularly at night under a lighting arrangement that enhances its splendor.”[20]

Figure 13 One of Kulas Auditorium's turrets. 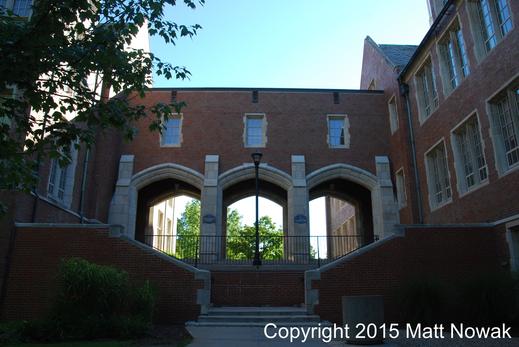 The “A Wing” refers to the tower building itself. The two other wings were built to house the sciences, although neither does so today. The original Physics and Biology Building, now called the “B Wing” of the AD Building, houses departments such as History and is connected to the O’Malley Center, which is a complementary structure built in 1994. The B Wing, located to the left of the main tower, is a “three and a half story gabled brick and stone building” that is connected to the A Wing by means of a “brick and stone portico” and a “stone pointed arch breezeway on the second floor and an enclosed walkway on the third floor.”[12] 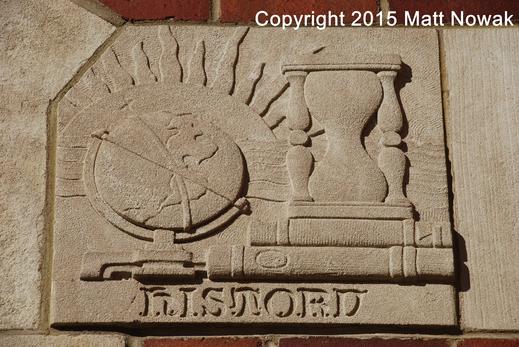 To the rear of the Administration Building is Kulas Auditorium, the school’s original gymnasium and cafeteria. Kulas is similar in style to the rest of the Administration Building complex. It has “large stone windows quoined into the brick and a stone water table at the base” and is a “three story structure with a flat roof and stone coping on the parapet.”[17] A monumental façade, composed of brick and stone, is dominated by brick turrets and a “three story pointed stone arch with cross hatch, basket weave patterning.”[18] 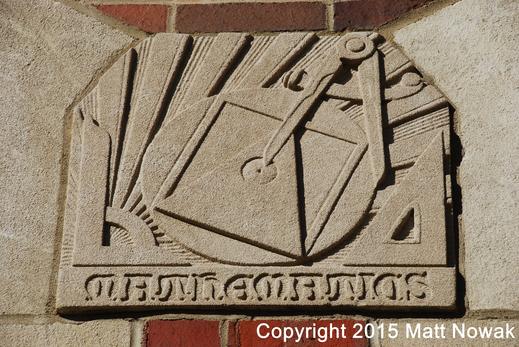 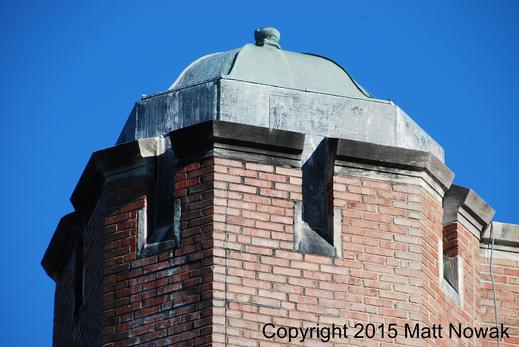