This bridge was demolished in 2015! 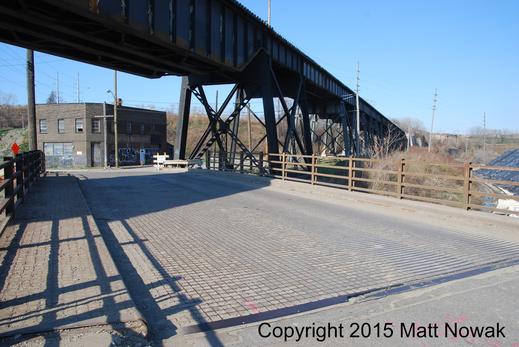 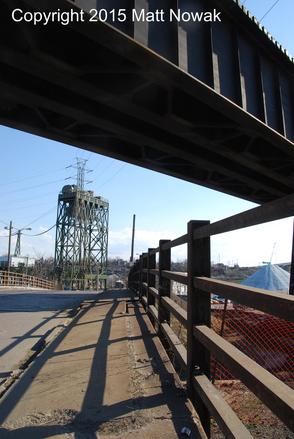 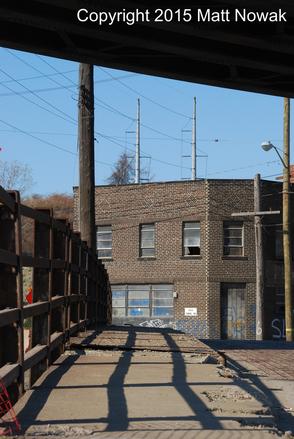 The bridge’s official historical status was listed by ODOT as “Not Determinable.”[7] The bridge witnessed heavy traffic use, especially by trucks operated by the nearby industries. The bridge’s replacement cost was, as of July 2015, an estimated $4,107,500.[8] While the demolition of the bridge is unfortunate, officials believe that the new bridge and improved road will provide safer sight-lines and turning radii, as well as stimulate economic growth in the area. Portions of the one-hundred-and-thirteen year old stone abutment sections, at the very least, should have been preserved and incorporated into the new bridge.

Figure 6 Condition of the concrete abutment.

History:
The Canal Road Bridge was one of the oldest bridges in Cleveland, having been built in 1902, although at least one source dates it to 1901.[1] The bridge had a unique urban location: above the bridge ran the Norfolk Southern’s massive Nickel Plate Road High Level Bridge and below the bridge ran another railroad line, an old Baltimore & Ohio (now CSX) track used by local industries. The bridge was also a stone’s throw from the Cuyahoga River as well as the West Third Street Bridge. Located in a major artery of transportation and business, the bridge was a major link in Cleveland’s industrial Flats.

The following is a video taken the day before the bridge underwent the demolition process (May 2nd, 2015). 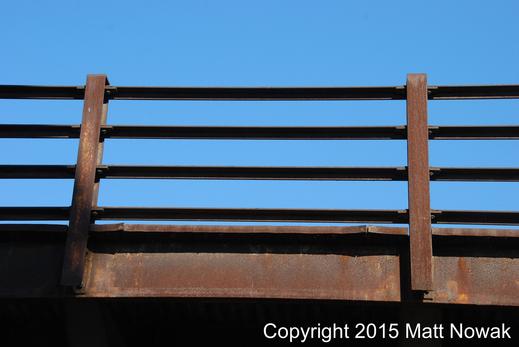 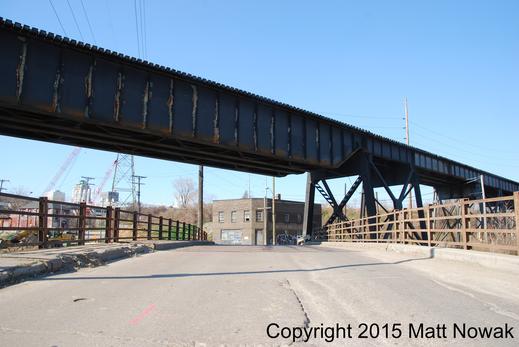 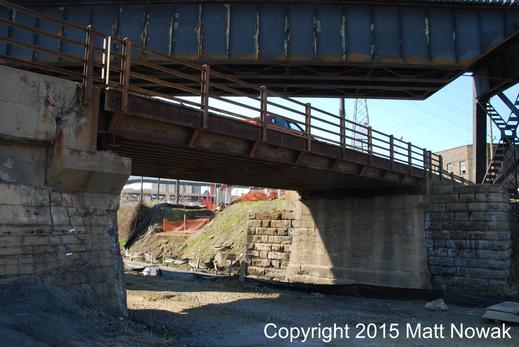 Figure 12 Condition of the deck also left much to be desired. Photo taken 5/2/15. 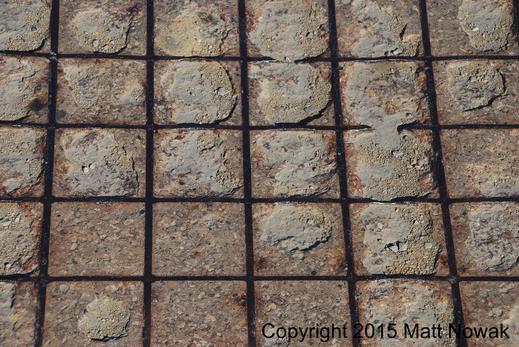 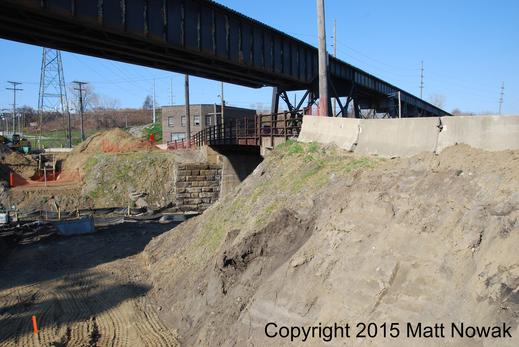 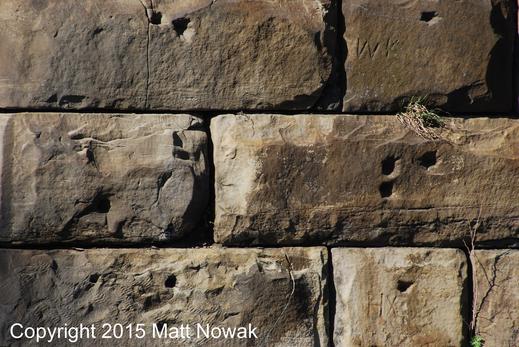 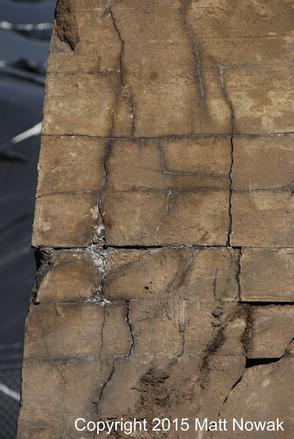 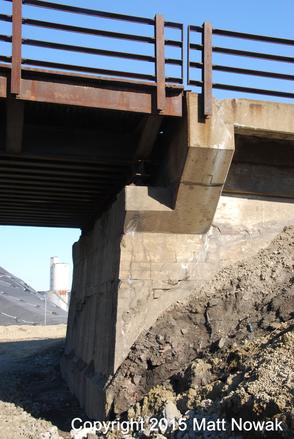 Preservation:
In May 2015, construction workers began dismantling the Canal Road Bridge in preparation for its demolition. Officials believed that the bridge was outdated and that Canal Road itself contributed to dangerous conditions, arguing that “Within these limits, Canal Road (today) [is] an inefficient, nonstandard roadway curve (contributing to obstructed driver lines of sight), poor pavement condition, and restricted free flowing traffic at the bridge.”[6] The bridge itself had some condition issues, including severely chipped concrete and holes in the deck.

Figure 4 The condition of the sidewalk left much to be desired. Photo taken 5/2/15.

Figure 3 The bridge as seen from ground level. 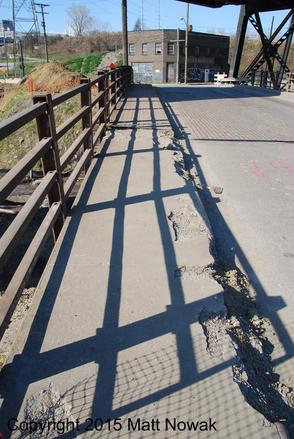 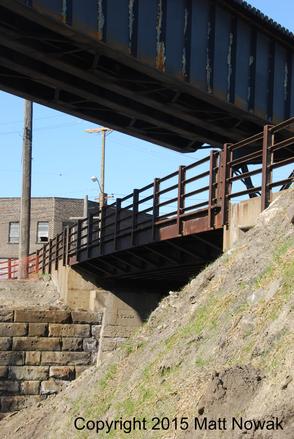 Design:
The bridge was a simple span rolled-steel beam bridge. It had one span, two lanes with steel guardrails and a steel-grid concrete-filled deck. The abutments were composed of stone and concrete with timber pile wingwalls.[2] The deck width was listed as 30.8 feet and the span length as 56 feet.[3] In 1965 the bridge underwent a massive rehabilitation.[4] The superstructure was replaced with the steel one seen in the photos. Additionally, the abutments and retaining walls were updated but original elements remained.[5]

Figure 2 The bridge was located under the Norfolk Southern bridge. Photo taken 5/2/15. 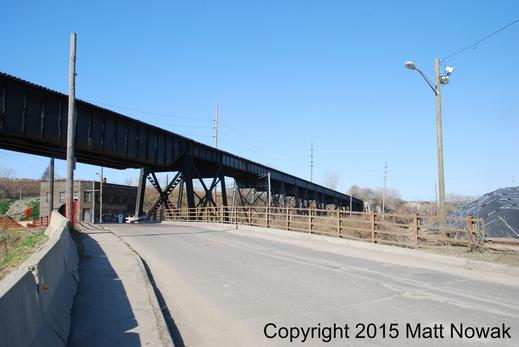 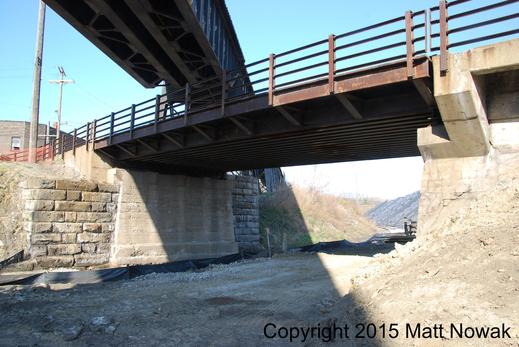